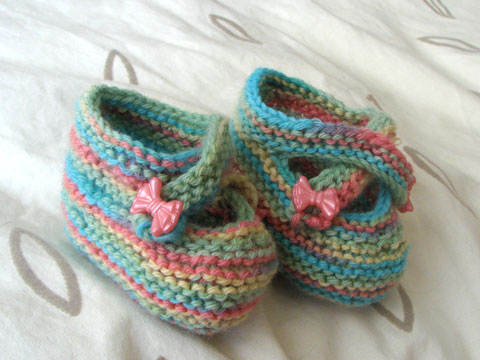 Hello! It’s been a long time since I knit anything because I spent most of 2010 sewing handbags or not doing anything creative at all! These are some booties for a fetus. It’s about to turn into a baby any day now. It’s the first baby item I’ve ever knit and it went by really quickly. Even though the yarn isn’t quite unisex, it doesn’t scream out “IT’S A GIRL” so I bought these little pink bow buttons and now these booties are appropriately feminine though after a conversation with the father I feel TERRIBLE for forcing gender norms upon an infant. While you don’t have to worry about things fitting a baby flatteringly (or being too big, because the baby can just grow into it), you do have to worry about whether the buttons are secured to the booties enough to prevent the baby swallowing the buttons so that you don’t end up murdering a baby. Knitting for babies can be greusome!

So a little bit about the fetus! It belongs to my good friends Tony and Davida. Tony and Davida also have a toddler whom I have babysat and yelled at almost 12 months ago and he is still shy around me!

This yarn is Knitpicks Sock Memories in a discontinued colorway named Paper Dolls. It’s really only good for small-scale things, like baby booties or fingers for these fun gloves I made in college. Otherwise the color repeats get really irrelevant.

The pattern is Saartje’s Booties, or as I like to call them, Sartre’s Booties! Hell is other babies, am I right? I knit the small size (31 stitches) per the pattern, but got confused as to how to knit the straps. I knit them on backwards at first, and ended up not going by the pattern. Also, instead of casting on ten stitches per strap I cast on 16 and sewed them down instead of giving them button holes and making them functional. I don’t know anything about babies but I know your time becomes very important when you have one, so instead of having to button up four straps you just slip the booties on, which is why I made the straps a little longer. 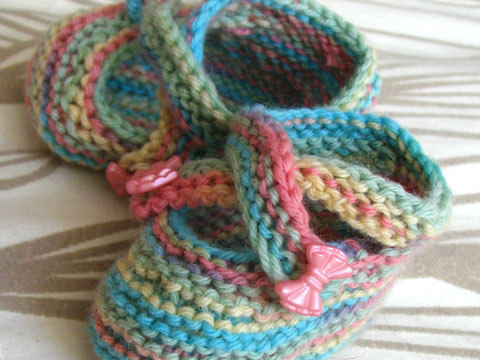 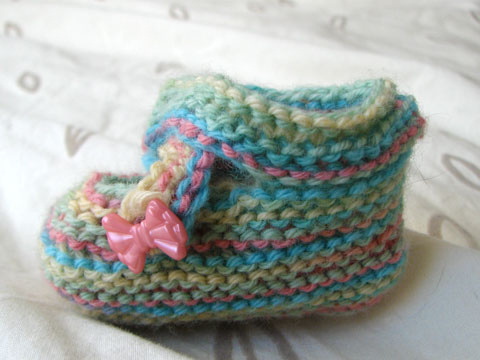