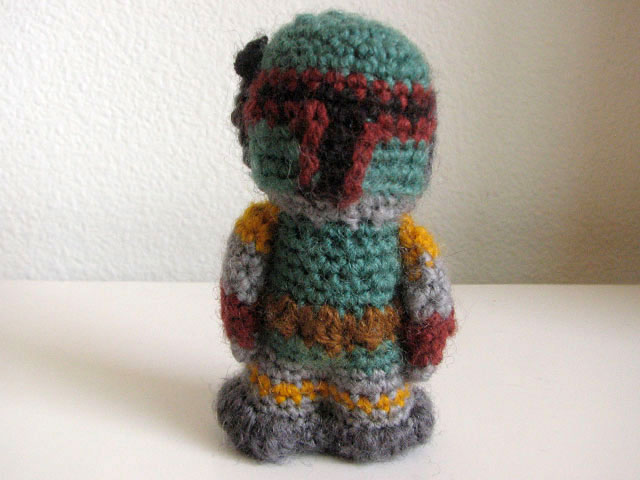 Hello to all! I crocheted a tiny-ass Boba Fett as a gift. I don’t know who Boba Fett is, but everyone keeps telling me he’s a pretty cool bad guy! The only Star Wars movie I’ve ever seen was The Phantom Menace. My dad dragged my ass to it when it came out and I fell asleep in a theater surrounded by people who actually had some context. Apparently it wasn’t even a good movie even if you DID know a thing about Star Wars.

This is not my first time at the amigurumi rodeo; at the beginning of 2010 I had this ambition to do an amigurumi figure a day and create this fantasy world of adorable, tiny, crocheted animals and anthropomorphic food. I did not pursue it completely, but now I think I should, considering I have a huge bag of stuffing and a bunch of doll eyes in my closet-that-I-turned-into-a-sewing-room.

Before starting, I was nervous that I would have to buy about seven balls of yarn - one for each color - only to use up a few meters of each and be left with a partial ball. This would have cost me a ridiculous amount of money, which is unacceptable. Then it occurred to me to use embroidery thread because I was using a slender crochet hook and I wanted a small figure. I went to The Playful Needle, which is an embroidery and cross-stitch store, and found, well, apparently it’s yarn intended to repair Persian rugs, according to the store owner. 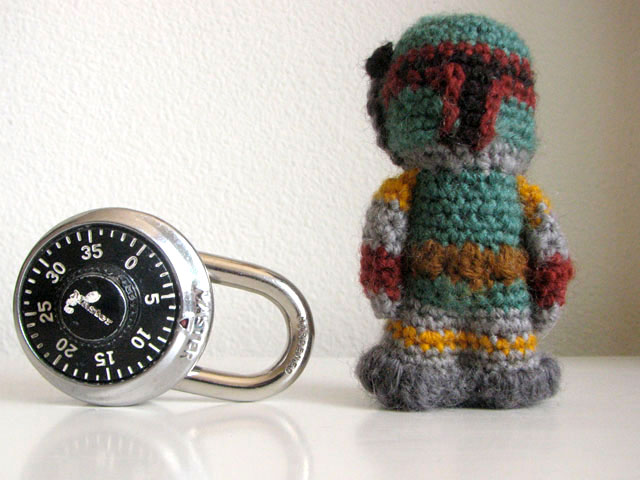 It’s basically a bunch of tiny skeins of several lengths of yarn each about 12” long. Each length was made up of three strands, each two-ply. Each three-stranded length was about the weight of fingering yarn. These were really affordable and I would definitely go this route if I decide to pursue my amigurumi menagerie. Futhermore, each length was made up of three strands, but I made Boba Fett using only two strands per length because three were too bulky and I initally DID end up with a big stupid doll. By reducing my weight to only two strands, I got extra length every three lengths by joining orphaned strands into two-stranded lengths so I could have gotten away with buying fewer skeins. I really appreciated being able to fine-tune the weight of the yarn I used because too thick a strand gives you a big amigurumi doll, reducing its cute factor and too thin a strand allows the stuffing to show through and forms a flimsy fabric. The only drawback was that it wasn’t one continuous THING of yarn, so they had to be connected using a felted join, which was very easy considering they were all 100% wool, but it was extra effort.

I crocheted this while finishing up Robert Heinlein’s The Moon is a Harsh Mistress and starting Tina Fey’s Bossypants on audio book (which, I’m going to assume is better than the print book because Tina Fey reads it herself and does voice impressions of SNL alum!). Audiobooks, seriously. I’ve always lamented that I don’t read anything because it’s such an active activity, and I always feel a little bit sad inside when my active activity involves consuming rather than creating (maker snob). Audiobooks connect me with reading again and allow me to multi-task. I’m really excited about this. 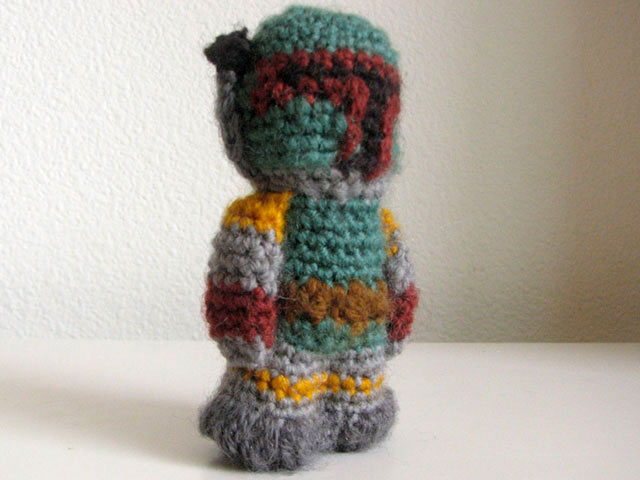