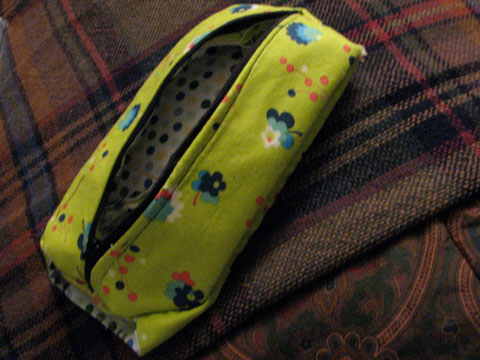 I consider myself pretty candid about things I make. However, for my first major sewing project in years I think I’d rather pretend that my first time came out totally awesome and hide all the ways I felt challenged or may have screwed up, which, for the purposes of this entry, are all theoretical. I think that when it comes to first times, it’s perfectly okay to not try to be perfect, but that’s the only time it’s okay. Expect more indiscretion the next time I make this bag, which will probably be once a week until I work my way up to Amy Butler’s Weekender Bag, which has been in my future since I saw it on craftoholic.

I haven’t been able to do a single thing until I made this bag. I go back to school Monday and owe a boy with size 13 feet a pair of socks and I only have one toe. I did this bag all in one night (as in, all night) and there are some definite “lol”s about it. I used all recovered materials which made it easy to not be precious, but then there were some aesthetic compromises I would not ordinarily have made. Canvas was the “interfacing” and clean parts of soiled pajamas made up the lining on the inside. I paint, therefore I soil clothes and happen to have well over 100 square feet of canvas ready. The outer lining was made up of fabric scraps from some fabric I had bought from reprodepot once. I intended to make a mixed-media project from it but I guess it never materialized. :) I bought the zipper months ago in Boston and I have no idea why. My mom’s house is still kind of new to me and I can’t find anything (also, she hides things) so I used the straightening iron I use for my hair to iron out the fabric. That part was awesome. 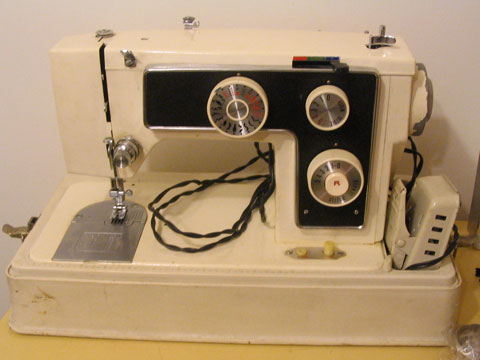 I used my late Great Aunt Dorothy’s sewing machine. IT IS ACTUALLY VINTAGE. IT IS FROM THE 1960S. IT REMEMBERS A DIFFERENT TYPE OF BRING OUR TROOPS HOME. I don’t know anything else about this mystery machine. My mom supplied me with a Singer manual from 1968 but the machine doesn’t say Singer on it anywhere and the model number taxonomy doesn’t match the Singer convention. I thought it might be a Pfaff because of the way the knobs are styled, plus the old Pfaffs went crazy with the knobs and this has three. I hate that I’m a total genius and yet even with magic Google I cannot identify this machine. It sucked when trying to figure out the freakin Rube Goldberg device that is threading the needle and I’m still not sure why sometimes I get a zig-zag stitch when all I want is not that. There were a lot of knick knacks that my mom gave me along with the sewing machine and so to get near the zipper I used some foot that was just slimmer than the default but I don’t know if it was a zipper foot per se. There’s so much I need to learn about this machine it’s amazing(ly ill-timed with the start of a new semester).

I had to handstitch a lot at the end because the fabric was too thick and I didn’t know to handle it, plus I was cranky. I think handstitching is invaluable anyway, and would not mind improving my hand at stitching. I want to make these bags for everybody and put goodies in them and give them as gifts. Actually, when I was done sewing this one, I thought about putting my sewing notions in it but that reminded me of this joke that either belongs to George Carlin or Rusty Ward about buying a garbage can and carrying it home in a bag, then putting the garbage bag inside the can. 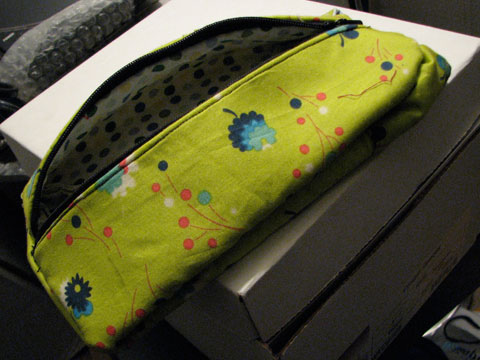