So, in the most traumatic knitting experience of my life, in May I dilligently knit the two center panels of Eunny Jang’s Print O’ The Wave Stole in Malabrigo lace. Malabrigo, by the way, is NOT VERY ELASTIC (foreshadowing!). It didn’t have a single mistake. In July, I grafted hundreds of stitches to unite the two panels, and upon mock-blocking it upon my bed (stretching it out to see how it looked, you know, to appreciate all my hard work), my inelastic, too-tight sewing job snapped and the thing ripped down the center. I put it in a bag and threw it into the back of a closet. It wasn’t until the end of August that I picked out the ripped yarn and unraveled a few rows of each panel and then threw it BACK INTO THE BAG and into the back of an even deeper closet until like, last week.

I didn’t like the idea that my only set of size 2 needles were like, BABYSITTING this unfinished object and I didn’t like the idea that I bought Malabrigo just to be ashamed of it and keep it in a bag. Even though my feelings were still hurt I tried picking up where I left off, but because the pattern was no longer in my immediate consciousness, because I didn’t know how far I ripped back on each panel, because stitches got dropped or bars-that-could-be-yarnovers got picked up instead, but most importantly, BECAUSE I HAVE A BALLWINDER, I decided to unravel the whole thing. Unfortuantely, because Malabrigo is so sticky and it had been inert for about six months, I kind of killed the yarn. In the end I had two not-continuous balls of Malabrigo lace to contemplate THE FUTURE with.

Above is Branching Out, which utilizes the Malabrigo yarn doubled with leftover Knitpicks Shadow from my first Kiri. It seemed that pairing these two yarns is an obvious, if not inadventurous choice as they’re both dark blue merino laceweight yarns. But then I got all analytical. 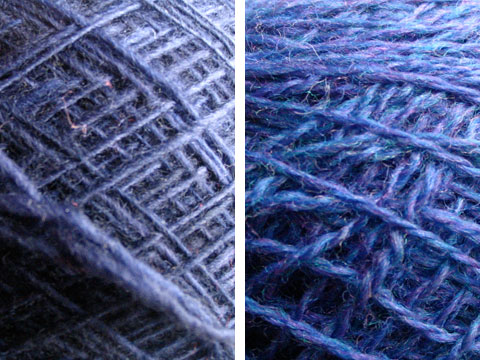 The two yarns are actually quite disparate. The Shadow (right) is not exactly blue, it has a chromatic range from blue to blue-green to a very pronounced violet. The Malabrigo (left), which is solidly blue, has qualities relating to value, as in light and dark, but all the shades are still the same tone of blue. These are all technical things that I relate to painting or drawing, so for those who never took studio art in high school, I made some swatches: 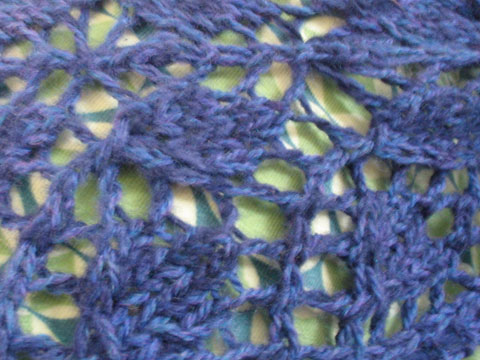 When working these two yarns into the same garment, the result is more successful than I would have imagined, as each yarn makes up for what the other lacks. The Malabrigo provides richness and depth, and the Shadow gives visual interest and variety. On a tactile level, the resulting fabric is spongy and soft. (In fact, my brother is walking around with it around his neck right now flapping the ends in my face and, in a Mick Jagger accent, saying It’s so fluffy it’s so fluffy. Okay he’s gone.) I chose to knit Branching Out because I was horrified to learn that I have been slip-slip-knitting improperly and I wanted a simple project to remind me how to do it right again because it’s so fundamental. Branching Out was actually one of the first things I ever knit because I wanted to work on my decreases. I had been slip-slip-knitting improperly then too. It’s amazing how many ways there are to be wrong! 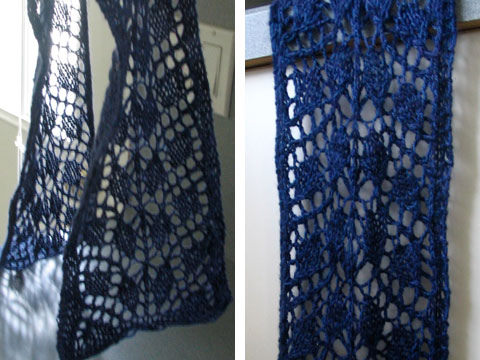 Yeah clearly someone needs to enroll in Photography for Non Majors.